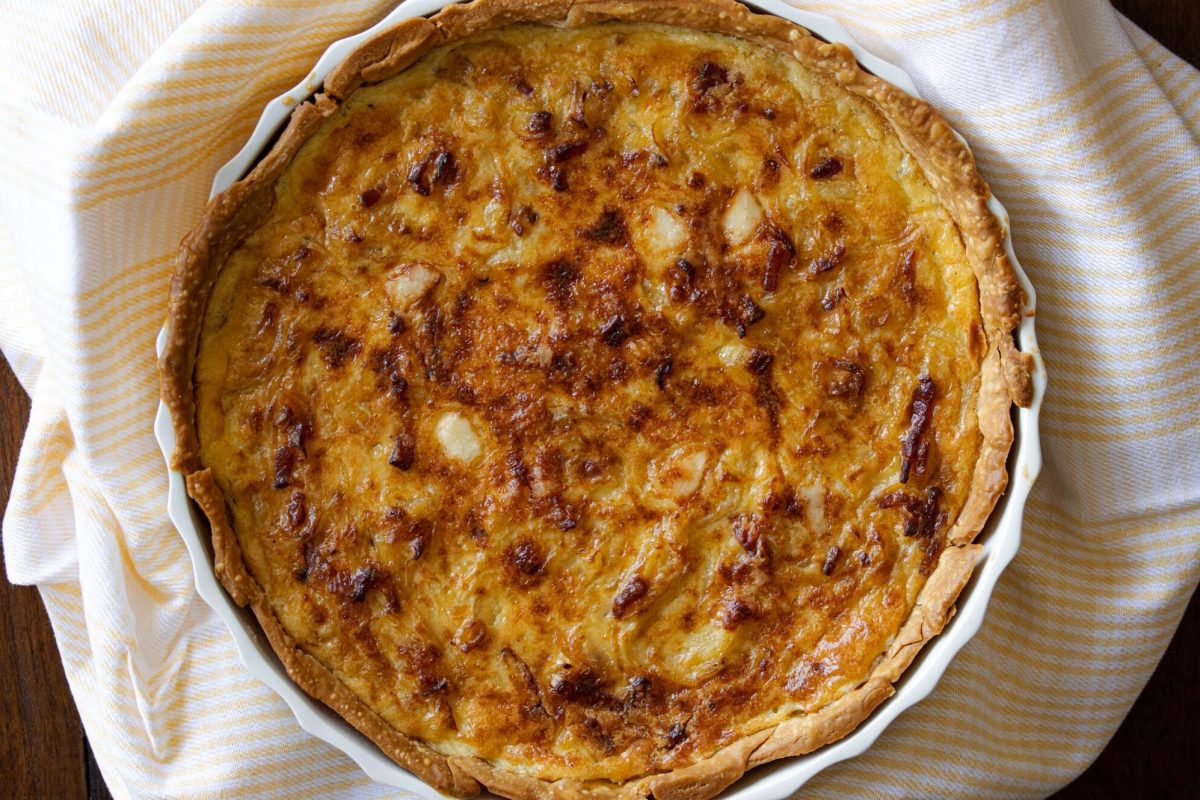 Growing up in France, a caramelized onion tart was our go-to lunch when you felt like something decadent. You don’t see these as much in the U.S. but trust me, once you’ve made it, you’ll never go back. The sweet caramelized onions combined with a flaky buttery crust, salty bacon, fresh thyme and bubbling Gruyère cheese… there’s nothing better! Pair this with a simple green salad and a glass of wine – it’ll soon become your go-to for a cozy Fall meal!

1. Preheat oven to 425°F.
2. Sauté the bacon in a large skillet over medium-high heat until crisp. Spoon out the bacon and put it on a paper-towel lined plate.
3. Drain all but 1 tablespoon of the bacon fat from the skillet. Add the onions to the bacon fat along with the leaves from 2 of the thyme sprigs, and sauté over medium heat until onions are very tender and slightly brown, about 15 minutes.
4. Add the brown sugar and cook for another 3-5 minutes until lightly brown and soft. The aim is for your onions to be golden but not dark.
5. Let the onions and bacon cool.
6. Thaw out the puffed pastry and roll it into a square large enough to cover your pie dish.
7. Butter and flour your pie dish and line it with the puffed pastry. Fill with pie weights or dried beans. Bake for 13-15 mins until the edges are lightly golden. Remove from oven, remove weights/beans, and let cool slightly.
8. Meanwhile, whisk the egg with the sour cream, heavy cream, salt, pepper, and garlic salt in large bowl. Add in the goat cheese, Gruyère (reserving about a tablespoon), leaves from 2 sprigs of thyme and softened butter and mix until smooth.
9. Mix your onions and bacon together and pour ½ of it into the pie.
10. Top with ½ the cheese mixture, then repeat with another layer of bacon and onion, then another layer of cheese mixture.
11. Sprinkle the remaining Gruyère over the top and some more black pepper.
12. Bake for 30-40 mins until the onion custard is set (a little wiggle is ok) and the crust is dark golden brown.
13. Remove and let rest for 10 mins to finish setting.
14. Garnish with the remainder of the thyme leaves and some more black pepper.