BEHIND THE SCENES AT NYFW: A BEGINNER’S GUIDE

New York Fashion Week, held twice a year during February and September in New York, is the coveted event where international fashion designers show their collections to the buyers, press, and public. It’s a mix of large branded productions (like IMG’s Mercedes-Benz Fashion Week) and smaller independent events. The shows are split between large tents at Lincoln Center and other less traditional locations like those in Chelsea, TriBeCa and Wall Street. The shows are by invitation only and are filled with editors, celebrities, buyers, press, fashion bloggers, and a whole slew of fashionistas.

Everyone always asks me how to get invited to Fashion Week and there’s no correct answer! It’s not a public ticketed event as it’s usually kept to people in the fashion industry and celebrities. The easiest way, if you have anything to do with fashion, is to get press credentials, like many fashion bloggers do. If you are covering the event for a magazine or blog, you can apply for press credentials at MBFashionweek.com.

If you can’t get credentials but you are still in fashion (a buyer, stylist, etc) then you can try to get on the PR list for the designer you are interested in. Contact their PR team and let them know you’d love to get a ticket to the show. Let them know why you should be attending their show (who have you styled for? have you worked with any publications? why are you of interest to them?) and include your past work… it’s your job to convince them! Most importantly, don’t forget to follow up! 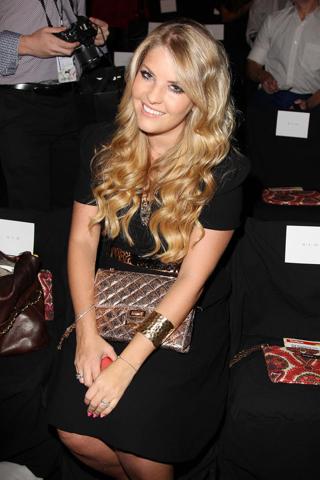 NYFW has its hierarchy and that’s seen most prominently in the seating chart! The first three or four rows are generally filled with celebrities, editors, reporters and buyers, so they can get an up-close look at the clothing and trends. Celebrities & editors of major fashion magazines sit front row, so if you’re looking to star-spot that’s where to look. However, there’s not really a bad seat at NYFW – the rows are designed so everyone gets a good look!

There are often gift bags & swag left on the seats of the first few rows (sometimes on every seat in the building!), filled with goodies ranging from edible yummies to beauty products. So, if you’re sitting in a row with swag, make sure nobody steals yours!

Don’t worry, you can still get involved! It’s extremely easy to follow NYFW online and you can really get the full effect! E! has amazing coverage live from the shows, and most fashion blogs and magazines do daily updates. Have the girls over, make a cocktail, and peruse the newest trends.

WHAT NOT TO DO